Service One Transportation Honors U.S. Military With Tribute to Veterans 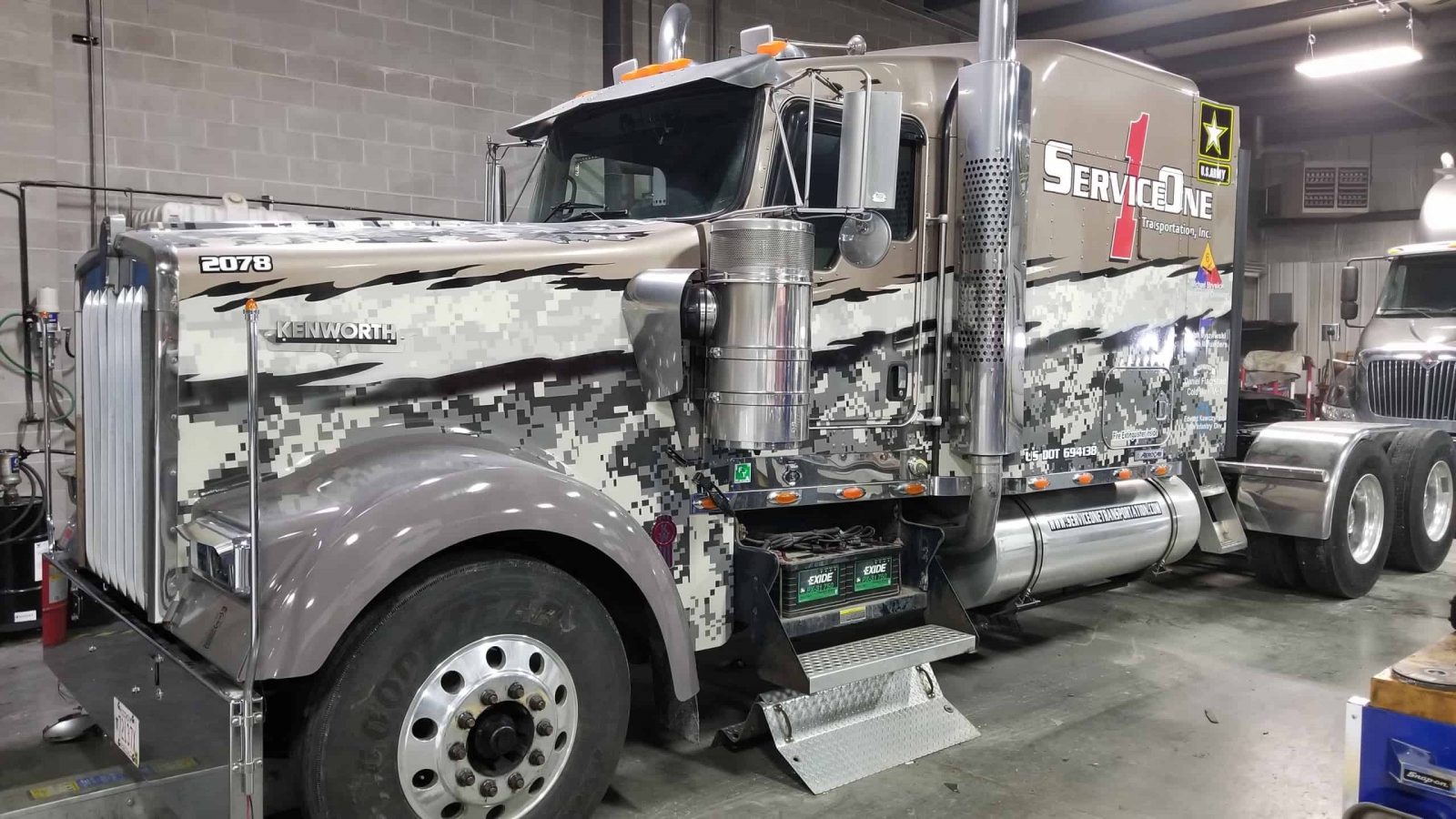 PLYMOUTH, Wis., March 13, 2018 /PRNewswire/ — Service One Transportation, a leading Wisconsin trucking and logistics company, salutes veterans of the U.S. Armed Forces with new custom-wrapped graphics on two of the Kenworth truckload vehicles in its fleet. One truck boasts a military camouflage pattern and the other is emblazoned with the Stars and Stripes, while the rear of each cab features a tribute to Service One family members who served with honor in the military.

“Our company has always maintained a family-oriented culture as well as a deep appreciation and respect for those who serve in the Armed Forces. We inherited these values from my father, who founded Service One after his own military career,” noted Dan Flagstad, Jr., President of Service One Transportation. “The custom graphics on our trucks are a tribute to the veterans within our extended Service One family as well as a public ‘thank you’ to all servicemembers, past and present, whose selfless sacrifices keep our country safe.”

Mike Myszewski, Vice President of Operations and Logistics at Service One, echoes those sentiments. “Growing up, I was surrounded by people who instilled in me a strong sense of patriotism and a profound gratitude for those who serve in our nation’s military,” he explained. “The truck wraps convey our pride in this country and in our family members who have served with distinction. Just as importantly, they allow us to recognize all of the brave individuals who have protected and continue to preserve the freedoms and opportunities all Americans enjoy.”

“These veterans are true heroes who have touched countless lives, and we are proud to count them among our Service One extended family,” said Myszewski. “Our tribute trucks serve as a ‘salute’ to all who have served in the U.S. Armed Forces, and we hope they will bring a smile to veterans as they roll down America’s highways.”

To learn more about Service One Transportation and its available truck driving jobs, visit https://www.serviceonetransportation.com.

Service One currently has openings for both Class A CDL company drivers and owner-operators. The Wisconsin trucking company welcomes applicants from its home state and surrounding areas in Illinois, Indiana, Iowa, Michigan and Minnesota.

About Service One Transportation, Inc.:

Headquartered outside Plymouth, Wisconsin, Service One Transportation offers a full range of trucking and logistic services—including truckload, volume less than truckload (LTL) and expedited shipping—throughout the 48 contiguous United States and all Canadian provinces. Dan Flagstad, Sr. founded Service One in 1997 with a single truck; today, Dan Flagstad, Jr. oversees the family-owned and operated business, which now employs more than 50 drivers. The Wisconsin trucking company has earned a reputation for unsurpassed customer service and is dedicated to “doing whatever it takes to get the job done right.” Service One is also highly regarded among drivers, offering excellent pay, full benefits and a “family-first” culture that ensures a proper balance between work and family time. For more information on Service One Transportation and its trucking, warehousing, logistics and supply chain solutions, visit https://www.serviceonetransportation.com.